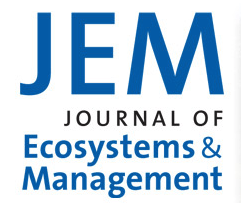 BC Journal of Ecosystems and Management

The Journal of Ecosystems and Management (JEM) is a peer-reviewed electronic journal covering natural resource and ecosystem management issues relevant to British Columbia. In...

Roads are a significant feature in the forest landscape and represent a considerable reduction in the area of forest land that can be used for timber production. The mean widths of three types of roads (mainline, operational, and in-block) in the Lakes Timber Supply Area were determined. A stratified two-stage sampling approach was taken to estimate the mean width of each type of road. The first stage was road selection and the second stage was points along the road. The target sample size was 60 roads of each type and 10 points on each road; however, the number of roads sampled was less than the target of 60. The average estimated road widths were 27.3 m (mainline), 19.0 m (operational), and 8.4 m (in-block) and were comparable to the assumed widths of 30 m, 18 m, and 10 m, respectively. The estimated average widths of the mainline and operational roads were not significantly different from the assumed widths; the average estimated width of the in-block roads was significantly different from the assumed width. The area occupied by the three types of roads in the timber supply area was 1796 ha (mainline), 10 043 ha (operational), and 2159 ha (in-block). Road width data will lead to reduced uncertainty in allowable annual cut determinations.