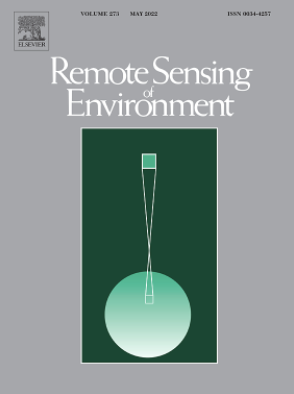 Remote Sensing of Environment (RSE) serves the Earth observation community with the publication of results on the theory, science, applications, and technology of remote sensing...

The retreat of mountain glaciers affects mountain hazards and hydrology, and new methods are needed to rapidly map glacier retreat at planetary scales. We automatically map 14,329 glaciers (30,063 km2) in British Columbia and Alberta, Canada, from 1984 to 2020 using satellite image archives from the Landsat 4, 5, 7 and 8 missions and reveal an acceleration in area loss that commenced in 2011. Glacier fragmentation, disappearance, and proglacial lake development also accelerated, as did the retreat of glaciers to higher elevations. Our annually-resolved method relies on the existence of previously published and manually validated glacier inventories from the mid-1980s and mid-2000's. Our methods performed well for clean ice glaciers, had occasional errors when proglacial lakes were present, and consistently underestimated the area of debris-covered glaciers. Clean ice glacier area loss accelerated sevenfold between the early [1984–2010] and late [2011−2020] epochs. This acceleration yielded rates of area shrinkage of −49 ± 7 km2 a−1 [early] and − 340 ± 40 km2 a−1 [late] with accelerated losses (32-fold increase) for small glaciers on Vancouver Island over the last decade. Glacier fragmentation accelerated from 26 ± 5.6 fragments a−1 to 88 ± 39 fragments a−1. About 1141 glaciers fell below our 0.05 km2 detection limit and so disappeared from our database, representing a loss of 8%. Proglacial lake area growth accelerated from 9.2 ± 1.1 km2 a−1 to 49 ± 4.5 km2 a−1. We also observed an acceleration in the upwards migration of median glacier elevations for clean ice glaciers from 0.31 ± 0.08 m a−1 to 4.7 ± 0.7 m a−1. Our workflow demonstrates the advantages of annual resolution glacier inventories and contributes towards the implementation of planetary mapping of glaciers and glacier attributes at annual resolution.